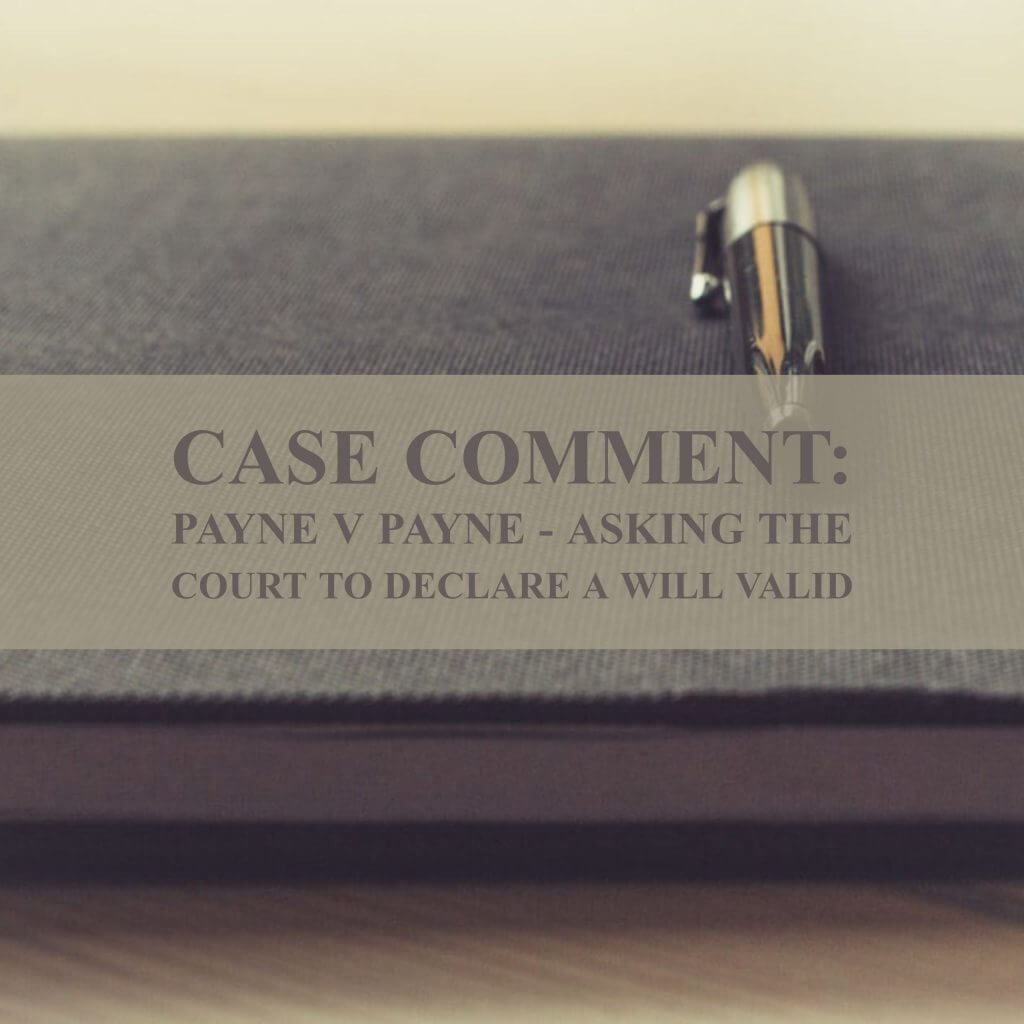 Case Comment: Payne v Payne – Asking the court to declare a will valid

Case Comment: Payne v Payne – Asking the court to declare a will valid

Mrs Payne alleged that the 2012 will was not properly executed and therefore not valid. The deceased’s son and grandson therefore asked the court to grant proof in solemn form of the 2012 will. This is a declaration that the will is valid and cannot be set aside unless fraud or a later will is found. Ultimately, the judge came to the conclusion that neither the 2012 nor the 1998 will was valid. He ruled the deceased’s estate should be dealt with under the intestacy rules.

The son and grandson’s evidence was considered ‘utterly unreliable’. The judge was unable to find that the deceased knew of the will and had approved its contents. As for the 1998 will, the judge’s decision was based on the fact that Mrs Payne hadn’t provided the court with the original will to inspect (the judge only had incomplete cropped photographs of the will to work with). Also, the witnesses had provided their names, occupations and addresses in block capitals but hadn’t ‘signed’ the will (using the common meaning of a signature being a unique and personal mark) and evidence as to the circumstances in which the will was made was not obtained from them.

Mrs Payne appealed and the Court of Appeal reversed the judge’s decision and found that the 1998 will was valid. The Court said that the law did not require a ‘signature’ (a personal and unique mark) from witnesses. It was enough for them to write their name with intent to validate the will. Should you be wondering why the decision against the 2012 will wasn’t appealed – the son and grandson were not given permission to appeal and that was the end of their case.

The most unusual thing about the case is that the original 1998 will was not obtained until the matter was in the Court of Appeal. The first judgment had been made without inspection of the original will but of cropped incomplete photographs. It wasn’t as though the will’s whereabouts were unknown though. By the end of the trial it was known to be in the Winchester District Probate Registry. It would have been easy enough for the judge to adjourn the hearing until the original will had been obtained. Had it been obtained, the judge would have likely come to a different conclusion and saved Mrs Payne the need to appeal. Whilst this wasn’t the only procedural flaw in the case, it was the most prominent.

Our team of Litigation solicitors can assist and guide you through any queries you may have in respect of the validity of a Will or if you feel a Will does not make reasonable financial provision for you when you thought it should. It is a complex area and one where specialist assistance should be sought. Please call our team on 01260 275 337 if we can assist. Alternatively you can visit our Litigation services page here or complete this form for a call back.