On the 31st of August, a determined team of no less than 11 braved the gray skies and drizzle to assist the Cheshire East Rangers. This year’s task was to clear as much of the overgrown fence that lined the path around Alsager Borrow Pit Meadows so that maintenance teams could access and repair the fence itself. 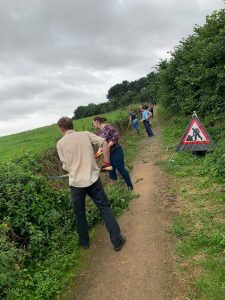 With such a big team, we were able to clear a huge section of the path – with groups covering both sides, wading through long grass, nettles and other hard to tackle undergrowth that had taken over the fence. Armed with large, sword like blades to cut down the plants, and hefty forks to scrape them away, the team tirelessly hacked and raked all morning. 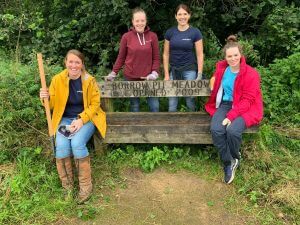 If the heavens hadn’t opened to stop the progress, we would have continued all day! Who said hard work can’t also be great fun? (and a great stress reliever!) We hope the pictures show both the tremendous difference that was made, as well as the fantastic, positive spirit of all those involved.

A huge thank you to the volunteers who took part – we made a real, noticeable, ad valuable difference. Also a big than you to Alistair from Cheshire East Rangers for arranging and supervising – we’re looking forward to helping out again next year!