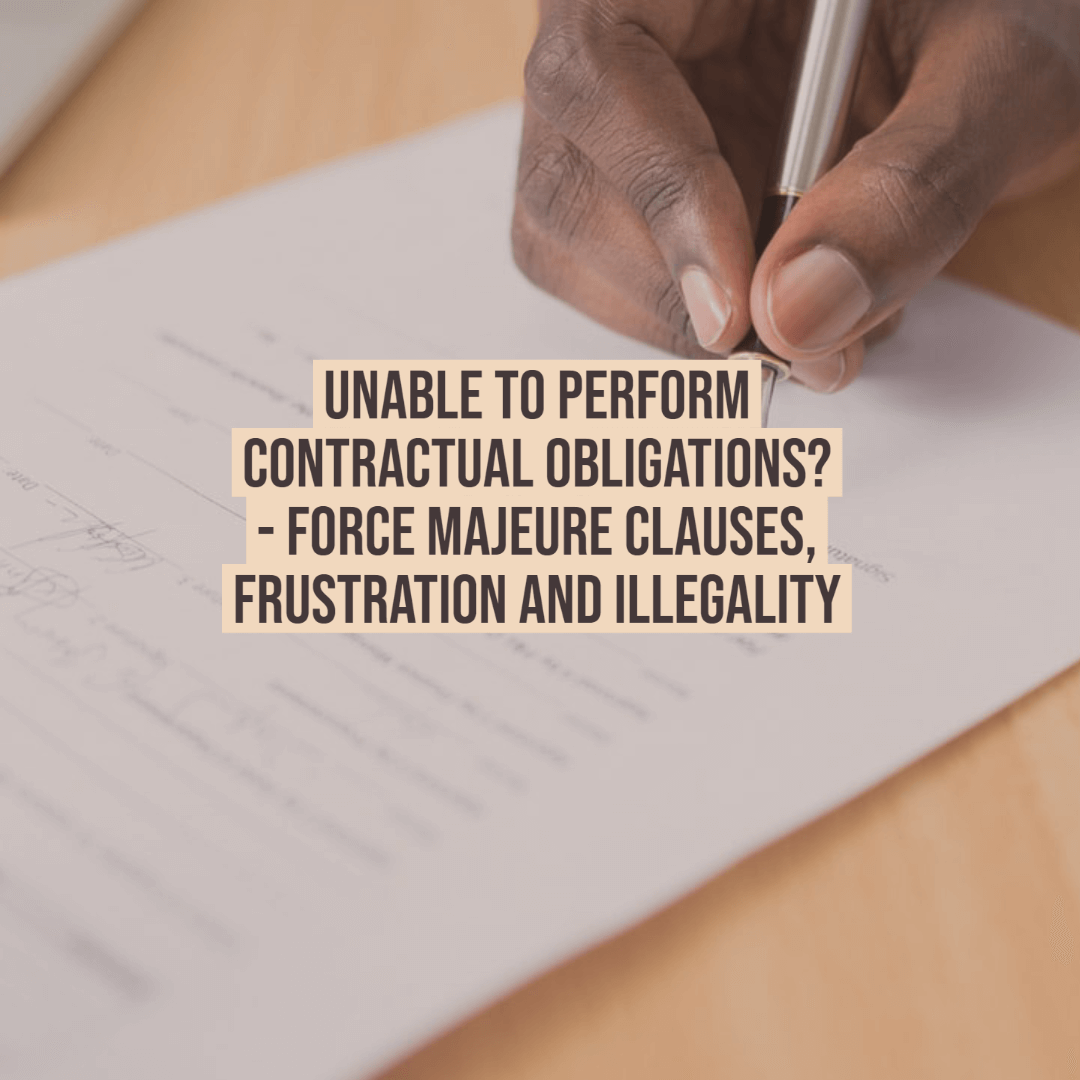 With the UK having been in lockdown for over a month now, many businesses will be considering how to deal with those commercial contracts that have become infinitely more difficult to perform, if at all, and what their options are. There are those who will be wondering whether the impact caused by coronavirus on their business will free them from any or all obligations under their contracts. Spoiler alert: it depends.

Depending upon how often you look at contracts, you may have come across a “Force Majeure” clause. This is a common clause in commercial contracts which essentially looks to excuse parties, either entirely or for a duration of time, from performing their obligations in the event of certain occurrences which ultimately prevent such performance. These occurrences have to ultimately be beyond the control of the parties. You will find that most examples of this clause will include events such as “acts of God”, floods, terrorist attacks and civil wars (to name a few). Some may even include pandemics and epidemics.

Those looking to rely on a Force Majeure clause will need to be careful in assessing the scope of that clause and ultimately whether the current situation would fall under that clause. The burden of proof is on the party seeking to rely upon it to evidence this. In addition, you have to be able to show that there was no way of avoiding the event or mitigating against its consequences (I would find it hard to believe that a contracting party would try to argue that there was a way to avoid the coronavirus).

It may be that pandemics are expressly stated within the clause. This then removes the need of assessing whether coronavirus would fall under that heading. That said, just because the term ‘pandemic’ is not expressly stated, does not mean you are unable to rely upon it as a triggering event. It may be that on a proper interpretation, the clause as a whole can be construed to include pandemics. Consideration would need to be had to the other events so provided to come to such a conclusion.  Consideration will also need to be had in respect of any formalities that are specified in the contract. For example, does notice of your reliance on a force majeure clause need to be provided in a specified way or within a specific timeframe? Additional food for thought is whether the coronavirus has triggered another event that is expressly stated within the clause that you could look to rely on.

If you find that your contract is completely silent on “force majeure events” – noting that a clause doesn’t have to be named “force majeure” for it to still be considered as such, you will be left to rely on the doctrine of frustration.

The doctrine of frustration allows a contract to be discharged on the occurrence of an event which makes it physically or commercially impossible to perform, or changes your obligations under the contract to something completely different to what was agreed at the start. The contract can be automatically discharged when a frustrating events happens, meaning neither party is bound to perform its obligations.

Generally speaking, a frustrating event is one which occurs after formation of a contract, strikes “at the root of the contract” and is beyond anything that was contemplated by the parties on entering into the contract, isn’t due to a fault of either of the parties and ultimately makes further performance impossible, illegal or completely changes performance to something the parties never considered at the time of its formation. Examples of such a frustrating event in this current situation could be the cancellation of an expected event and the unavailability of the subject matter under the contract (amongst others).

Linked to force majeure and frustration is the doctrine of illegality. This doctrine operates to discharge a contract where it’s become illegal as a matter of law for you to perform it. Broadly speaking, the law on this is rather complex and requires detailed analysis of its application in the current situation.

An example of a possible “illegality situation” could be where you were due to put on a festival next week, but doing so would mean you are in direct contravention of the current social distancing and gathering policies. Attempting to do so could be classed as illegal and you could seek to rely on illegality (or frustration or force majeure) to discharge your obligations.

A party may find that they are able to rely on Force Majeure clauses and/or the doctrine of frustration and/or the doctrine of illegality but this is ultimately fact specific and the consequences of raising each of these arguments could bring about different results. It’s important to understand that use of these routes will be of no assistance if it simply makes your performance of the contract more difficult or uneconomic. In such cases, there may be other avenues open to you to alleviate these issues such as seeking to engage with the other parties to agree a variation to the contract.

Whatever your concerns regarding your commercial contracts, the Commercial and Civil Litigation Team is on hand to advise and assist you with all aspects of it. Please do not hesitate to get in touch with us on anything touched upon in this article. We understand that this is a trying time for businesses everywhere and we are to provide you with the legal advice needed to get through this time and ensure that your business continues for years to come.