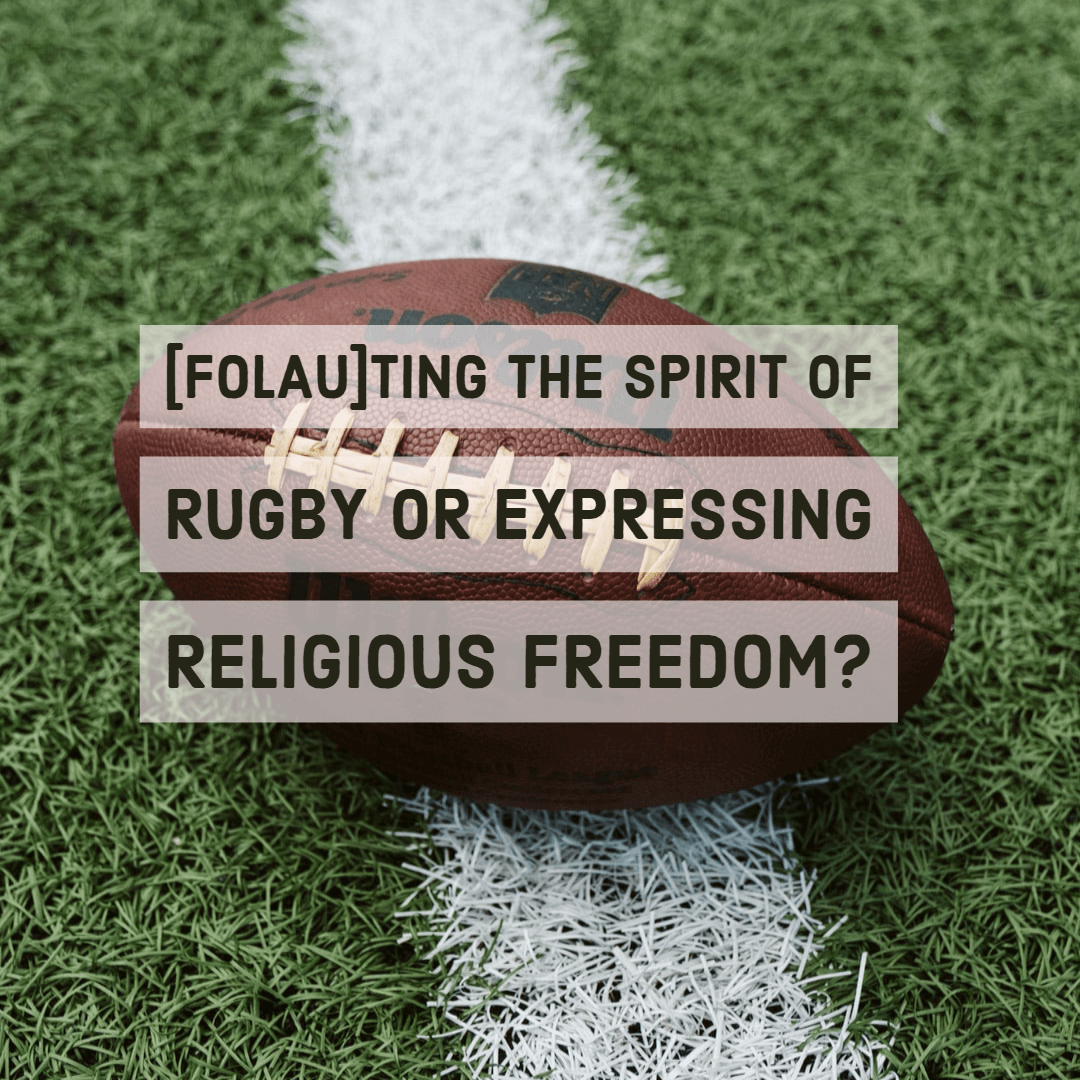 Back in early 2019, Australian Rugby player, Israel Folau, posted to his Instagram account that “those living in sin will end up in hell unless [they] repent”. He includes “Drunks, Homosexuals, Adulterers, Liars, Fornicators, Thieves, Atheists [and] Idolaters”. As you can imagine, this has caused quite the controversy and stir amongst the LGBT+ community.

His employer, Rugby Australia (“RA”) claimed that Folau’s Instagram post went against RA’s ‘core values and qualities of inclusion… and respect’. As this was his second incident and with increasing pressures from sponsors and leading politicians, they sought to take action and terminated his contract for a high-level breach of RA’s code.

In response, Folau maintained that this dismissal amounted to religious discrimination and brought a claim against his employers. Folau’s substantial claim of $14m was based on his assertion that “no Australian should be fired for practising religion”. I might add too that he was heavily supported by free speech campaigners and religious freedom advocates on a national scope. The Australian Christian Lobby was probably the largest who backed him with a crowd-funding page to pay for his legal expenses amassing a whopping sum just shy of $2m.

The trial, although not within the jurisdiction of England and Wales, would have been very interesting from an employment law perspective. It would have explored the competing ‘protected characteristics’ of ‘religion or belief’ and ‘sexual orientation’ and provided guidance on how these should be balanced by an employer. This case has recently been settled – the terms of which will remain confidential – meaning it won’t be getting its day in court…

But what are we able to take away from this?

You should ensure that any policies and procedures are sufficiently incorporated into the contract of employment. In this case, the employers had stipulated in the contract that the code of conduct should be strictly adhered to and that each player was under a duty to maintain the standards expected of them. In this regard, Folau’s posts were clearly a breach and the RA were entitled to take action against this.

Employers should ensure that their employees are aware of their responsibilities and how they are expected to conduct themselves, this includes what they post on social media.

RA claim that Folau had been warned formally and repeatedly about his comments and his ongoing conduct. As well as his conduct amounting to a breach of contract, RA may have also contended that these formal warnings amounted to ‘management instructions’ and failure to follow these instructions was justification for the disciplinary process that ended with his dismissal.

An employee may have the right to free speech (broadly speaking) but an employer also has a right not to be associated with such hard-held beliefs – especially when this is going to have a negative impact on their reputation. Providing you have set out what is expected of your employees and incorporated this into the contract, if the employees conduct is likely to cause reputational damage to you then you are entitled to take disciplinary action.

These are an ideal way to conclude employment.

This provides an opportunity to conclude matters in the most amicable way possible and to avoid the costly and lengthy litigation process. Just because an employer may be entitled to dismiss it does not follow that they will get away scot-free – employers run the risk of a disgruntled ex-employee bringing a vexatious and opportunistic claim. This also means a confidential outcome for both parties.

For the employer, a settlement is a commercial decision that gives them security and certainty in not having to deal with the matter any further. It also means that the money that would otherwise be spent fighting this legal battle can be thrust back into the sport. For the employee this provides an opportunity to move on too. Rising legal costs (despite being heavily supported on this front), negative publicity and pressures from those who opposed his views would have all been a mounting pressure for him and his family to deal with. Now, he is at least able to put this behind him – although his controversial posts may mean that finding other employment may be a tad trickier for him.

Was the dismissal justified? Or should Folau be entitled to post his religious views on his own social media? Gareth Thomas posting in response to Folau, said; “…don’t be influenced by his words. Be the better person and be YOU. Whoever YOU is. Hell doesn’t await YOU. Happiness awaits YOU”. Did dismissing him give this whole fiasco the oxygen it didn’t deserve?