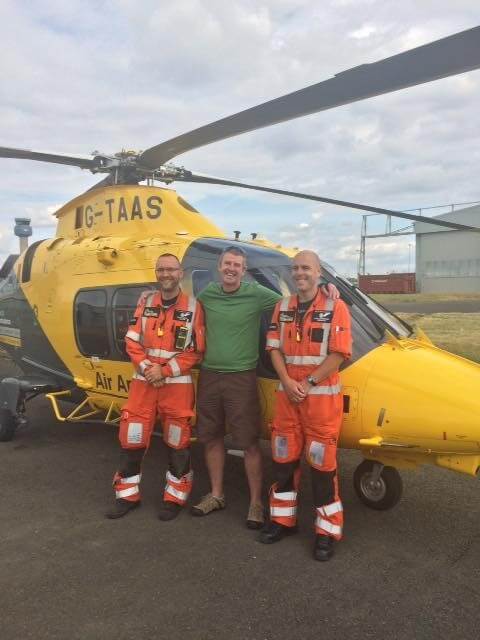 Dave Farmer, a local man from Haslington was involved in a life changing road traffic accident on 23rd May 2016.

On the day in question, Mr Farmer had been driving home through the Peak District after visiting family in Sheffield. He had joined the main road to Buxton after driving up Winnat’s Pass in Castleton when the Defendant, who was driving at a dangerous speed in the opposite direction, completely lost control of his vehicle and collided with Mr Farmer’s car.

The Air Ambulance were quick to the scene in light of the remoteness of the accident location and took Mr Farmer to the Royal Stoke University Hospital where he was admitted for one and a half weeks. At this stage, Dave was in and out of consciousness and has very little recollection of the accident or immediate aftermath.

As a result of this collision, Mr Farmer suffered a fracture to the front of his skull, he suffered 2 bleeds on his brain, a fracture to one of the vertebrae in his neck, a fracture to his right cheekbone, 2 fractures to his lower jaw, 3 fractured ribs, collapsed lungs which required chest drains as well as injuries to his left arm and wrist.

Immediately following his discharge from hospital, Mr Farmer was cared for by his family and in particular his wife Kate, who has been a fantastic support. He also received care through the community nursing team.

Where to turn for help?

Unfortunately, Mr Farmer was at a point where he had been left feeling completely let down by the criminal justice system. The CPS had brought a case against the Defendant for driving without due care and attention, however the Defendant did not plead guilty until a couple of days before the Trial. This was almost a year after the accident had happened, in which time, Mr Farmer had been made to feel at fault for the accident when he knew that he had done nothing wrong.

The Defendant had been exceptionally lucky in the accident and had managed to walk away without any serious injuries.

The criminal prosecution resulted in the Defendant receiving a minimal financial penalty and driving ban in light of the ‘exceptional hardship’ that was argued to result to his family if a harsher punishment was given.

In light of the uncertainty over Mr Farmer’s future at this point, he was looking for help with his options from a legal point of view.

Mr Farmer’s physical injuries took time to resolve, however he has made a remarkable recovery overall from these. The injury to his brain though has resulted in ongoing symptoms. For example, it has affected his hearing and the peripheral vision in his eyes. It has also caused numbness in his fingertips and mouth. Mr Farmer has noticed a difference with his speech, he struggles with his memory and tracking a line when reading is difficult.

These ongoing symptoms have sadly meant that Mr Farmer was unable to return to work as a Supply teacher at Monks Coppenhall Academy and Hermitage Primary School, despite both his own and the school’s attempt to make it work.

Mr Farmer also had his driver’s licence revoked by the DVLA.

The loss of his licence impacted greatly upon Mr Farmer’s independence and the reality of his situation as a result of the accident took its toll.

Mr Farmer has said “This has been a nightmare experience for me and my family, made harder by the dishonesty of the other driver, the insurance company and the criminal legal system. After initially pleading ‘not guilty’ he finally changed his plea to ‘guilty’ a week before the Trial was due. The impact this has had upon us all both physically and emotionally has been immense. Despite this, no one throughout the criminal legal process has ever asked me about the hardship that me and my family have faced as a result of his actions. I was unable to drive as a result of my injuries for longer than his driving ban, to me that is not justice! I am lucky to have survived and I feel that I need to speak out for the many victims of dangerous driving who are not that lucky. Our lives have been changed forever by one man’s actions, this happens all the time and it’s about time it was addressed.”

During this most difficult of times, Mr Farmer had the support of his family to help him. He also had the medical support from his case management team as part of the personal injury claim with Poole Alcock and eventually, we were able to provide the DVLA with enough evidence to overturn their decision, using the Exceptional Cases Criteria and after Mr Farmer undertook a driving assessment.  Mr Farmer’s driving licence was returned to him, which brought back his independence and positivity for the future.

Looking to the future

Whilst on the one hand, Mr Farmer has been incredibly lucky and has made a remarkable recovery, he has been left with permanent injuries, which may not appear to be much on the surface, however they impact upon him on a daily basis and have prevented him from returning to the career that he chose and enjoyed. There is no amount of compensation that can take this away and return Mr Farmer to the position he was in before the accident. Sadly the Defendant’s actions have taken that away. Conversely however, the law does allow individuals to claim compensation for the injuries that they sustain and the financial impact that it has upon them, to ensure that whilst they may now be looking at a different future to the one they had been before the accident, they are compensation to ensure that their financial situation is not compromised and any future expenses caused by the accident are also compensated for.